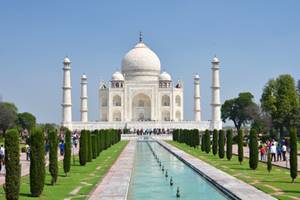 The Taj Mahal is counted amongst the world's most iconic structures. Built in white marble, the monumental edifice is amongst the world's seven wonders and is built on the bank of the river Yamuna in the city of Agra in the Indian state of Uttar Pradesh. The Taj is recognised as a UNESCO World Heritage Site - a testimony to the sheer brilliance of this wonder of architecture.

The Taj Mahal was built by Shah Jahan, the Mughal Emperor in the seventeenth century in the memory of his beloved wife, Queen Mumtaz Mahal. It is said that the tomb took as many as 22 years in its completion as 20,000 artisans worked day and night to fulfil the emperor's dream - rightly then, the emperor left no stone unturned to bring heaven on earth!

Shah Jahan, the fifth Mughal Emperor dearly loved his wife Mumtaz Mahal, a Persian princess who left for her heavenly abode while giving birth to Shah Jahan's 14th child. Shah Jahan's grief knew no bounds and the emperor commanded the construction of a tomb for his beloved queen - one, that would remind the world of the eternal love story. Three centuries later, the Taj Mahal still stands amongst the world's greatest masterpieces unmatched in its architecture and design.

Shah Jahan's dream of building one of the finest structures on earth was set in stone by Ustad Ahmad Lahauri. The entire Taj Mahal complex is spread across 42 acres in the centre of which stands the magnificent tomb. The complex also houses a mosque and a guest house. The Taj has well manicured gardens on three sides, which add to its ethereal beauty.

The Taj Mahal comprises of a central structure surrounded by four beautiful minarets, each more than 40 meters in height. Inside, an octagonal screen houses the replica of the real graves, which are situated on the lower level. Not to be missed is the central dome, which measures 115 feet in height and is a crowning glory of the architectural brilliance of the Taj. The decoration on the exteriors is considered the finest of the Mughal style.

The Taj Mahal is built in traditional Persian and Mughal architecture. The Humayun's Tomb in Delhi is said to have been a major inspiration behind the construction of the Taj. Shah Jahan chose white marble over red sandstone, which has been extensively used in the earlier Mughal buildings. The tomb is also known for the Intricate semi precious stone work inlaid in white marble.

The Taj Mahal's four minarets are built in a manner such that in the event of a catastrophe, the minarets, slightly tilted outwards, would fall away from the central tomb, thus protecting it from damage. The dream fulfilled, shall remain immortal in the minds of men for all times to come, such is the beauty of the Taj Mahal: the dream in white marble. 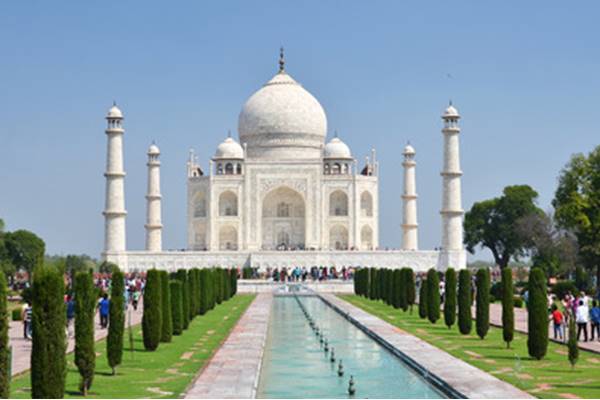